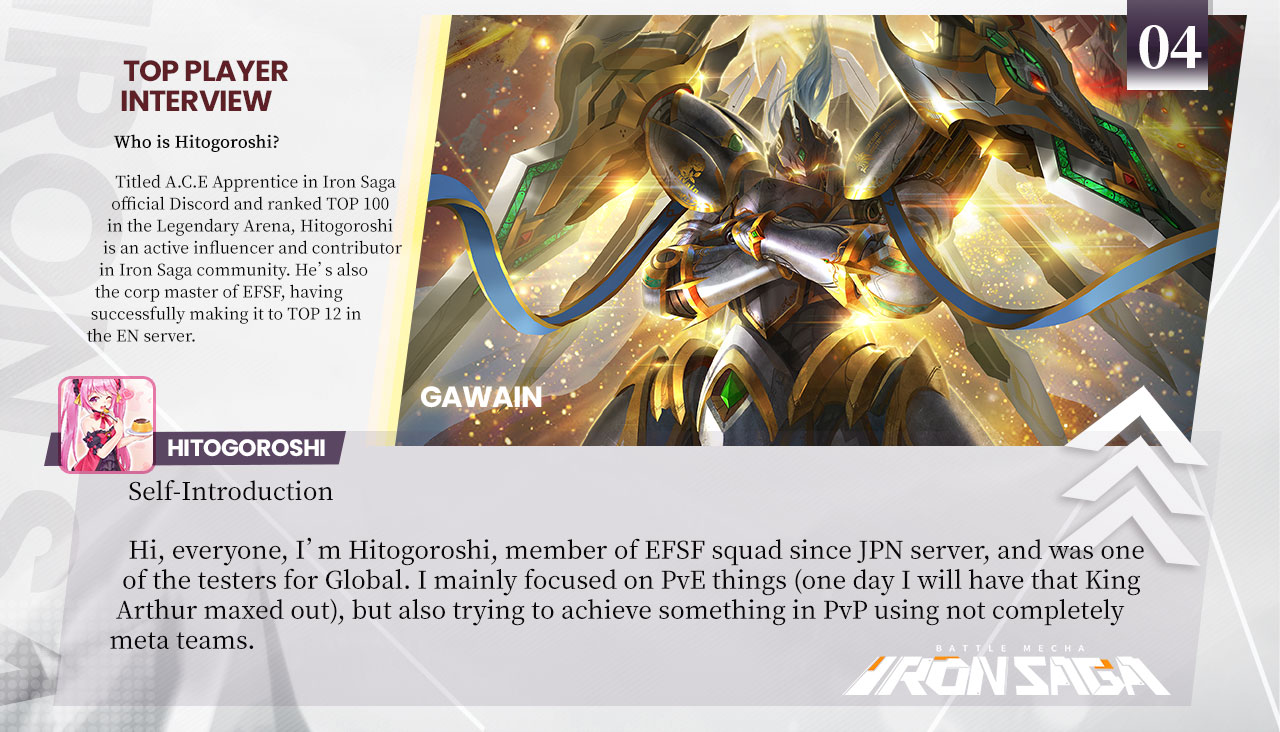 Titled A.C.E Apprentice in Iron Saga official Discord and ranked TOP 100 in the Legendary Arena, Hitogoroshi is an active influencer and contributor in Iron Saga community. He’s also the corp master of EFSF, having successfully making it to TOP 12 in the EN server.

Hi, everyone, I’m Hitogoroshi, member of EFSF squad since JPN server, and was one of the testers for Global. I mainly focused on PvE things (one day I will have that King Arthur maxed out), but also trying to achieve something in PvP using not completely meta teams.

Hi, Hito the non-sleeper, how many times per week and for how long do you play Iron Saga?

Nah, I sleep XD, just EU time zone. As for frequency, I play Iron Saga every day for several hours. According to my phone data currently I have 834 hours of gameplay on Global.

What do you do in Iron Saga on daily basis?

Challenges and PvP, if we have event then whole stamina goes here, if not (/me trying to remember when we had no event), then I go to farm KA.

Among these events, which one is your favorite, and why?

I won't pretend to be original, KRAKEN-chan is our waifu. And why, well, rewards were just way too good :D and (Beep——) was the worse one, I wonder how many farmers still have PTSD from it?

Do you have a favorite list for mechas in IS?

Knights series are my favorites (and no, it's not because Gawain GL is op), they are just giving me Code Geass vibes.

Do you have any "unpopular" mechas with strong potentiality as commendation?

Apocalypse Iron Head. People usually treat it as slow walking garbage, but there are at least several builds to make it strong enough to stay in top100 at this moment. One is based on Sasaki with instaAS, another is with Slokai as main pilot and Vanessa as copilot (other details are top secret info).

Waifu Time! Who’s your favorite pilot in IS?

Do you prefer PVE (Story Mode) or PVP (Arena)?

PvP battles are generally more interesting, but I'm excluding latest story chapters with all those immortals, those are really interesting to clear.

About mains story, which chapter impressed you most? And do have any tips on chapter farming?

I’ll go with the most popular pick here: A.C.E. academy arc. There are no real tips for chapter farm, get your Greek Trio for early game and then collect what you want (Though I would advise 1 Galahad even for PvE things).

What keeps you stay in Iron Saga?

Waifus + good team building system. Auto battles are also good thing. Sometimes you want more possibilities to manually control your mechs, but fully manual grinding mobage is a big NO for me.

Let's move to Parts and Copilot, do you have any tips as to building a well-balanced team?

For PvE, 1 melee (Linda in melee dps preferred) +3 ranged is the most common setup. One of the ranged can be units like Kongou + Ryoma for CCing enemies, others are DPS. For Copilot, someone with heal is basically a must, it can be Vanessa with her aura, or Kelly/Kuon with their single target heals.

About Parts, key thing for survival is good armor, from farmable armors best are Nano Armor and Firm Steel, from lover rarity armors probably Modified Shield is the best one. Also, from farmable equips I would like to mention High Energy-Absorption shell, it is very good pick for the most of popular mechs and it is very easy to get.

Overall atmosphere here is nice, of course sometimes we have conflicts, but those are mostly waifu wars. Admins here are friendly and always jumps on the train when we start some kind of mass jokes (probably everyone still remembers massive case of Fragism).

I saw you have 6 teams. Each one serves a purpose?

Not each one, some are for testing. But in general, they are:

Also, a lot of players have one team for corp boss and some older players have separate teams for Nidhogg and Secret Keeper.

Rock scissors paper, I beat dude A, dude A beats dude B, dude B beats me :D

I'm always happy to see new faces here and it is interesting to challenge them, because there is always hope for some original team compositions (though no one beat Zenes in terms of originality yet).

Do have any expectation for Iron Saga EN server?

Being successful and getting more and more new players, and I think we all want this, because being successful game means more chances of having game-based merchandise and anime.

Except for that, what do you want to see in our future updates? imaginable or unimaginable ones.

Actually, I would like to see Retrofits for B/A mechs and some reworks for weak S+ mechs. and of course, Retrofit for Galahad!

Do you have any tips for beginners and those complaining about investment on the game?

Main tip for new players would be join our discord and reddit, we have a lot of info and always can help newcomers. For players of lower levels, experiment with your mechas and equips (don't forget, restore function will return all used gold and mecha dupes) to find better combinations) there is no content impossible to beat with F2P team.

What else do you want to say to the fans who will be watching this?

Believe in RNG and Slokai. On a serious note, just don't rush, IS is not that kind of game where you get everything in one day and then just spam daily missions.